Looking at the differences between the Italian, British, and American suit styles, each has its unique geographic characteristics. This article explores the three iconic garments of men’s fashion. You might be aware of the existence of these three styles already. But after reading all through, you will get to understand a great deal of importance about each of them. This will be in terms of the historical background of these international suit styles and their features.

Italian suit style grew immensely into a great idea in the 1950s when the first fashion show held at the Palazzo Pitti showcased the Italian suit for the first time. Many names are believed to have played a significant role in the design of the Italian suit, as we know it today. Some remarkable names are Ermenegildo Zegna, Nazareno Fonticoli (founder of Brioni) and Armani. The Italian suit has evolved in many styles over the years. Italian cut suits have maintained their popularity in Europe and across the world today.

The Features of Italian Suits

The Italian suits are highly tailored and fit close to the body. The jacket is lightly padded and fitted through the chest with a very slight contour at the waist giving a more streamlined appearance. The jacket is considerably less structured compared to the British suit, and as a result of that, the cloth follows one’s natural curves. It has high armholes and very little shoulder padding. It also features narrow-cut lapels, a more pronounced V-shaped torso, and piped pockets.
The suit trousers have a tapered waist, which fits firm to the hips and goes slightly from the knee down. The front is flat and ends with one break. Recently a no-break type of trousers is common in the Italian style.
This suit is ideal for men with slimmer builds because when all these elements come together, it gives the illusion of a well-proportioned, slim frame.

The Origin of British Suits

The British suit style traces its origins to one of menswear’s famous grounds called Savile Row. The trendy lounge suit appeared in the late 19th century but traces its origins to the simplified, sartorial standard of dress that was established by the English king Charles II in the 17th century. To date, this famous London street is synonymous with bespoke tailoring, thanks in large part to innovative designs. These suits were made for elites in the military and British nobility, which reasons why the jackets are well known for having defined shoulders with thick shoulder pads.

The Features of a British Suit

The suit jacket is made to fit perfectly on the shoulder around your torso. The sleeve ends at, or just above, the wrist bone when your arm is at rest, showing about half an inch of your shirt. And the length of your suit jacket slightly goes down to cover the bottom curvature of the buttocks. The front of the British suit jacket is often adorned with a ticket pocket, while the back is distinguished by a double vent. One of its unique features is the thick shoulder padding the suit is made of.
The trousers are tailored close to the body with a tapered waist. These trousers take a comfortable middle-of-the-road stance that is not too tight or too loose. The trousers are slim with a high waist and pleats and are usually worn with a quarter or half break. 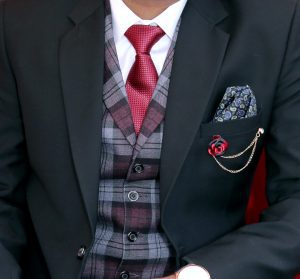 History of the American Suit

The American suit has evolved and can trace its roots far back to the 1920s. This was during the prosperous and iconic time for America caused by the expansive economic boom. The American suit, also called the sack suit, was popular due to its loose, comfortable fit. Although the name “sack” was meant to recall the French sacque jacket, which was built on two entirely straight panels, it came to be applied as a negative comment on the way the suit fit. The very first tailors of these suit styles were Brooks Brother and J. Press.

The American suit style is characterised by its baggy, masculine silhouette and straight-cut jacket. The American suit jackets are straight cut with a relatively loose fit and soft silhouette that pairs with light shoulder pads. It has loose sleeves and low armholes. They come in a variety of lengths, with the addition of vents, and the jacket pockets may be jetted or straight.
The suit trousers are usually flat-fronted and straight-legged. The fabric extends to the ankles with mostly full breaks.
The loose, shapeless fit of these American suits still influences most of what is seen in major department stores in the United States. This suit could accommodate various body types, making it ideal for mass production.

Hopefully, you’ve grabbed a few differences in the international suit styles for men’s wear worldwide. So when choosing the right suit for you, always keep in mind those differences and pick what suits you best. To get started with the creation of your bespoke suit, Hidalgo Brothers are here to assist you to achieve that desired suit. So which suit will you commence with?. British, American, or Italian suits?. For more information, contact us.

What is the main difference between British, American and Italian Suits?

Italian suits used lighter materials, making them suitable for slimmer and more athletic people. American suits are sturdy and built for tougher builds. British suits are the most formal and are highly tailorable to body types.

Which country makes the best suit?

Well, that entirely depends on what your goal is. We find Italian suits have the most flair and style, whereas, British suits are the best for looking proper and formal.